Fehmarn has a lot to offer

Attractions on the Sunny Island in the Baltic Sea

Who wants to learn something new in their holiday is in the right place here. The choice of attractions is big and various.

The Sunny Island Fehmarn has a lot more to offer besides beach and nature, so there are a number of various museums which invite you to investigate, to discover and to be amazed.

Galileo Wissenswelt is a museum on the Island of Fehmarn which deals with the three topics natural sciences, technology and culture. 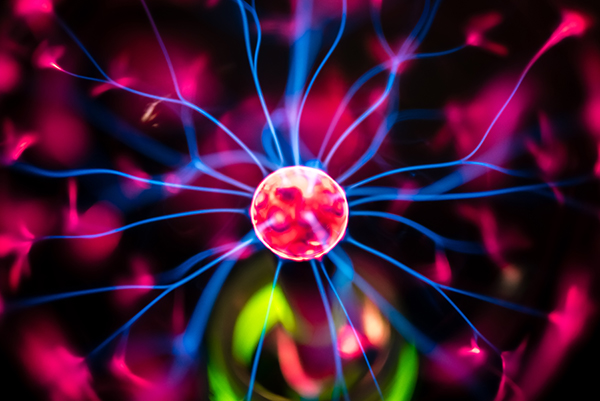 technological history. This museum on the Island of Fehmarn displays a classical collection entertaining and educational for children and teenagers alike. It invites visitors to try out and discover for themselves according to the principle: to touch helps to understand.

The tour of the museum starts in the natural science section. Following the path of life through a tunnel you will see real fossils which you are allowed to touch. This is highlighted by the display of the giants of Earth’s history. The attraction of this section is the original skeleton of a hypacrosaurus. Moving forward in the history of our planet into Ice Age you can marvel at the skeleton of a cave bear, real fossils of mammoths and prehistoric Stone Age tools. There is also a small geological section, inviting you to visit the interior of a volcano combined with a show of different minerals. To complete this detour an earthquake

simulator gives you an experience of what earthquakes feel like. There are displays of the microcosm with insects, shellfish and snails. In a subsection, which is dealing with human evolution and medicine, scientific models and historical medical equipment are presented.

The exhibition of technology stresses interactive experiments. Visitors will understand physical phenomena by doing little experiments by themselves, thus it becomes much easier for the visitors to take part in the history of technological development. The museum owns a collection of historical objects, for example holograms, section models of engines and optical illusions. An exciting attraction is an operating Tesla coil which can produce awesome lightning. This can be watched at every full hour.

In the next section about overseas arts and crafts you will find displays of items of everyday life and of fine craftsmanship brought together here from different continents, countries and cultures. The aim here is to show the diversity of human habits and, consequently, create an understanding between races, nations and cultures. 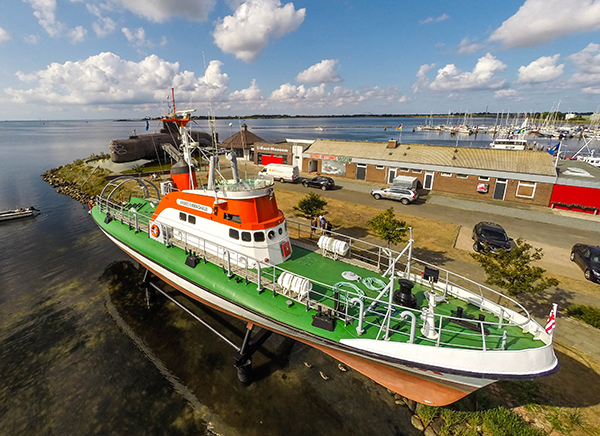 One hundred fifty years of the history of coastguard on the Island of Fehmarn are presented in this museum. There is a cinema, a children’s play area and many historical objects bringing to life this exciting and dramatic branch of maritime life.

The visitor receives a summary of the technology of sea rescue in the  waters of Fehmarn when opening numerous locker doors and viewing their content. The children’s corner provides play and entertainment for the younger ones, while the cinema shows movies on maritime technology and safety on sea in historical context.

The main attraction of this museum is the rescue cruiser “Arwed Emminghaus”, which started service in 1965. She was named after the German journalist and ardent activist for

an organised and institutionalised rescue for those distressed on sea. The boat was stationed in Cuxhaven from 1965 until 1985 when she was moved to Grömitz. Her new duty there was to take over SAR for the region of the Lübeck Bay south of Fehmarn. The boat was taken out of service in Germany in 1993. The Icelandic government bought her and named her “Hannes Th. Hafstein 2188” She stayed in service for Iceland until 2006. From 2007 until 2013 she was in private ownership in Rostock. The boat was bought by the group of founders of the SAR Museum in Burgstaaken. Until she was moored there in 2014 the rescue cruiser was fully seaworthy. A movie shown in the museum informs about the extension of work which the construction of this interesting museum required.

A major attraction for Burgstaaken is the Submarine Museum. Not only the enthusiasts of technology are drawn to discover this naval rarity; many people come here out of curiosity and interest to experience the interior of a submarine that had seen some years of service. Visitors will find out about life in tight quarters and will soon realise what it meant for crewmembers to bear with this way of life for months when at sea. You can find an exhibition providing information about the German submarine fleet of the post war era in the adjacent building. 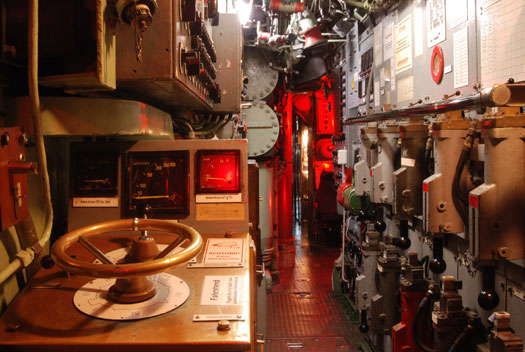 After a 2 year- building time U11 was taken into service in the 1st Submarine Squadron of the Bundesmarine, the German Navy. During the cold war the boat served merely to protect the German coast. It was improved into a double hull vessel in 1988. The second hull was meant to protect the boat against torpedo hits. In the following years the boat served as submarine torpedo target. This boat was in service for 35 years, it covered 177900 nautical miles in 2100 days on sea.

In 2005 the Submarine Museum opened in Burgstaaken. It took 2 cranes to position the 520t boat into its place. The boat is 43.5 metres long and only 4.6 metres wide. Its overall height is 9.8 metres. There are no restrictions for the visit. You may also throw a glance through the original periscope or lie down on a sailor´s bunk bed to try the feel of it. Very soon you will discover how scarce room is on a boat like this and what it meant for the crew!

Experiment in darkness is a challenging museum on the Island of Fehmarn. In this exhibition visitors will experience what it means to live in the dark without vision. Every visitor will be blindfolded, equipped with a stick and instructed, and then you must feel your way through the exhibition.  You will discover a forest walk, spend a visit to a flat, go shopping in a supermarket and take a city tour. You will not only hear the typical noises, but you will also perceive the scents! Further instructions about where you are will be given by loudspeaker.

The managers of this exhibition want to raise people’s awareness not only for the needs of the blind but also for the needs of other handicapped people. Therefore, you will have an interactive visible area with a multitude of stations and collections of practical and curious tools. There is a path for wheelchairs, an easel for mouth painting, and an array of exhibits that are important to blind people. Visitors may also test their skills on a path wearing glasses that mimic the sight of drunken or drugged persons. This will challenge your sense of smell, hearing and touch as well!

The museum is planned for the education and integration of people with and without handicap in order to increase mutual understanding. There is also an opportunity offered to take a tour of the museum guided by a blind person. There will be given the time for questions and answers at the end of this tour!

The rooms housing the blindfolded tour have still enough remaining light, so that the blindfolds can be removed safely at any time. This makes the museum is completely safe, even for children.

As early as 1897 the Museum of the Island of Fehmarn was founded in two rooms of a former Latin School. After the acquisition of the house of the former organist the museum could be extended to 20 rooms in 1940. The Museum of the Island of Fehmarn is also known as Peter Wiepert Museum; named after the former director of the museum who had organized and managed the extension of the exhibition area. In 1980 the museum was further extended by adding the house next door, the house of the priest’s widow. As already said this is the oldest house of the island dating back to 1581. Currently the museum shows objects illustrating the cultural and historical aspects of island-life in all its 23 rooms. The exhibits cover regional topics: geology of Fehmarn, local history, craftsmanship, the guilds, nautical history and hunting.

Of course, you will find the windmill museum  in the old windmill named “Jachen Flünk”. This is one of a few windmills of its kind in Europe that is still in working order.

The mill “Jachen Flünk” had been built in 1787and was working until 1954. In 1958 the Federal State Schleswig-Holstein acquired the building and since then it has been a registered building

The windmill was completely overhauled and restored to its old functionality. Then it was handed over to the Society for the Collection of Antiquities of Fehmarn. This organisation runs the windmill as a museum to exhibit the working of an old windmill and to show the ways of traditional farming in this region. In the storehouse belonging to the mill there is a show of old farm implements and models of local farmhouses to illustrate to be seen.

In its best days the sail-windmill was a very profitable business for its owner. The mill used to grind barley to pearl-barley, and wheat too.  The produce was then shipped to the Scandinavian countries. The high quality of his produce brought a higher price per pound of meal for the miller on Fehmarn. Later the work of the mill shifted to milled whole grain and sifted flour. After the First World War many farms had their own whole grain mills and the request for milling service dwindled fast. In 1954 the windmill had to close down.

The Society for the Collection of Antiquities of Fehmarn has constantly run and maintained the windmill and taken care that the building remains in working order. This activity can be only continued with the support of the state office for the preservation of monuments of Schleswig-Holstein.

Enjoy your break with your family in wonderful surroundings directly at the natural beach. All rooms, apartments and holiday houses of Hus Seeblick give you a lot of space and luxurious extras. 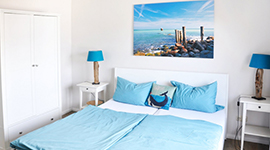 Enjoy our maritime hotel rooms or –apartments for 1-4 persons. 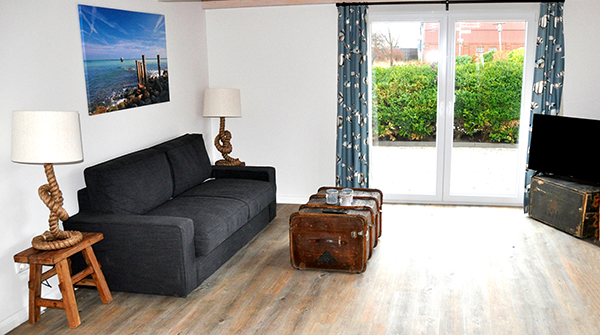 Our charming holiday houses with luxurious features are designed for 2-4 guests.